The Concept of The Statues and Sculptures in Lobby Area 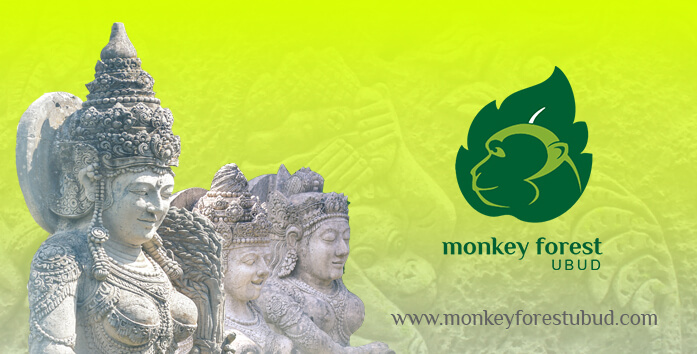 The Statue of Goddess of Sri

The Statue of Goddess of Sri (Sri Devi) holding paddy, is placed on the west side of lobby that accompanied by angles in shape of Apsari. The Apsari’s statue are manifested by the three statues of fountain on the north side of Yoni Pool that giving bless of Fertility to the world. By abundant milk of life and beauty smile will guaranteed the result of harvest. 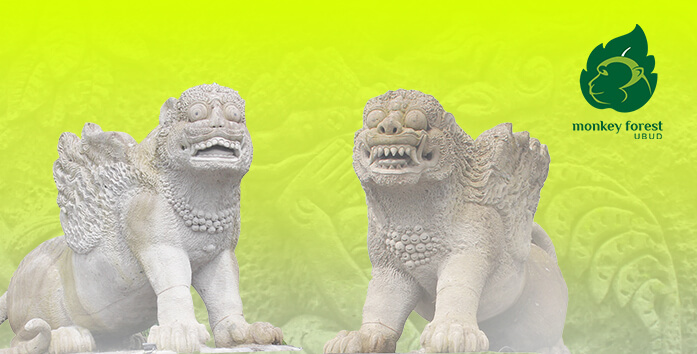 Goddess of Dhurga (Dhurga Devi) well know by having many manifestatioons and names that make her also referred as the mothher of Universe. Dhurga Devi has a mounts in shape of lion and tiger. The statue of tiger is placed on the north side of the lobby. It said Dhurga Devi mounted the ruler of the forest to slay Mahisasura (an evil that tried to destroy nirvana) 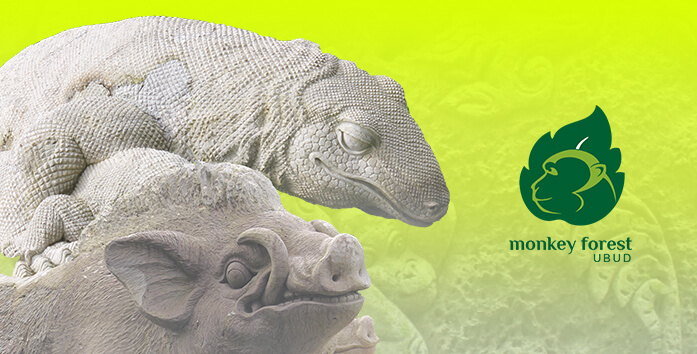 The aspect of four Brotherhood

The aspect of four brotherhood in Tutur Kandapat beside the other two above also takling shape in form of boar and komodo that placed in front of the lobby. These four statues are symbol of beast who welcomed a soul when they entered eternal realm on their first journey of afterlife. On the next journey the soul will run through titi ugal agil (vibrate brigde) that manifested by wooded bridge that relatively narrow and long until they faced batu terbelah (divided stone) that created based on candi bentar/ candi belah 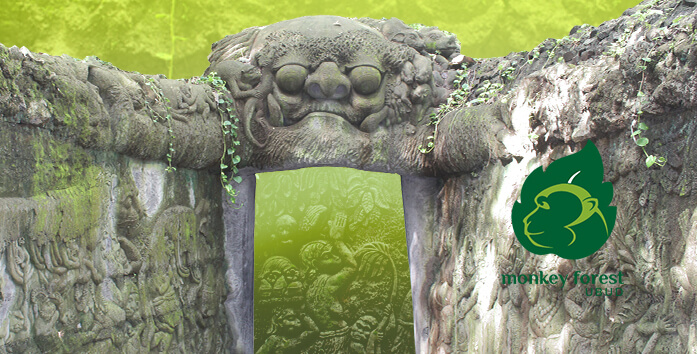 The journey of the soul continue to a vace called Durgama. The word of Durgama Come from “Durga Mata-Ji” a term referred to worship Durga Devi. Durgama Cave represented in from of cave with sculptures and reliefs on it wall. There is a lingga statue inside the cave the cave as a symbol of God Shiva on his holiness abstract from and a relief of Durga Devi in her rage expression. On Entrance of Durgama Cave the are relief from Tantri Kamandaka, which is story of animals. Relief on the left side illustrated the process memendak (pick up), is a ritual procession to welcome the arrival of the Gods, which in this matter is the visitors. Relief on the right side illustrated the process of farewell, the process of escorting the guests to the way home after their visit. This fragment continue untul the exit gate of the cave inside the forest. There are also statue of Jro Gde and Jro Luh (Male and Female tall barong) that made in shape of square 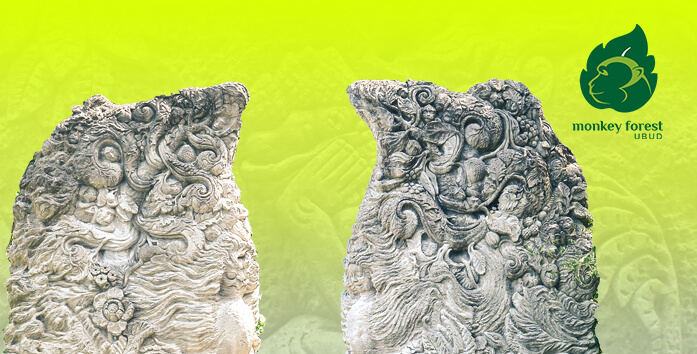 Candi Terbelah also symbolize a mountain with vas forest (flora) and animals (fauna). Biological of the mountain that also crafted in sculptures such as owl (the messanger of death), snakes to represent reptile and any other deadly beast 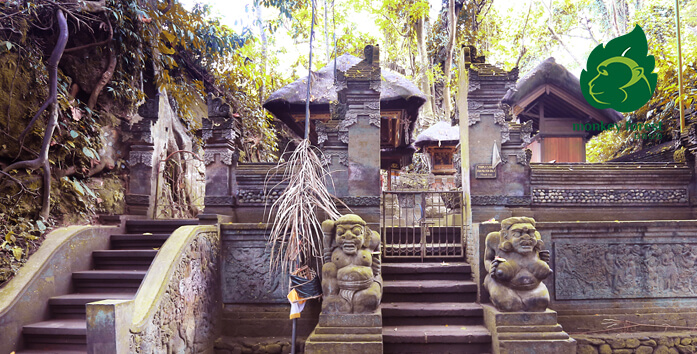 Holy Spring Temple is a sacred building area specified for worship The Goddess of Gangga. Holy Spring Temple became a special place to perform the purification process of the Tapakan/ Statues that representing the God and the soul of the people that shared same faith before praying to other temple area in Monkey Forest Ubud. The workship at Holy Spring Temple aims to convey gratitude for the blessing of holiness and prosperous life 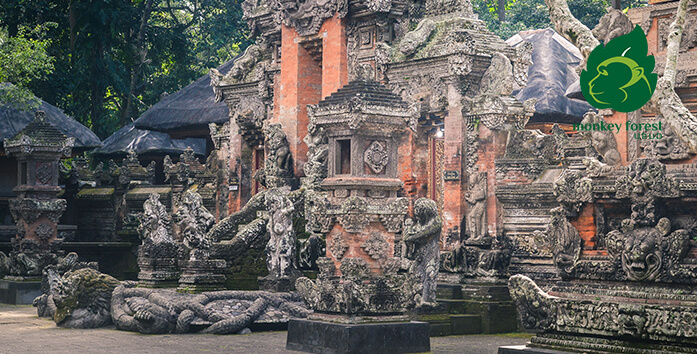 Pura Dalem serves as a place of worship of God Shiva, the embodiment of Hyang Widhi as the Fuser. In addition, this sacred temple is also as a place of worship of Goddess Durga as the main deity of the Bhairawa Sect, so the Pura Dalem is closely related to the Setra (cemetery) and Pura Prajapati as a place to worship the cosmos to neutralize the positive and negative forces. The location of Pura Dalem is to the southwest of Pakraman Village Padangtegal where the wind direction is controlled by the God Rudra, which is an aspect of Shiva. 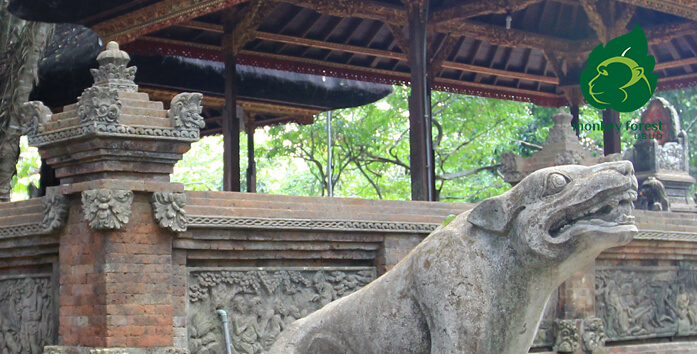 This cemetery belongs to the people who lived in Padangtegal village. This cemetery is only temporary used to bury the corpse until the moment of Mass Cremation ceremony comes or waiting for the auspicious day accourding to the Balinese calendar.

In Padangtegal Village we conduct Mass Cremation Ceremony every 5 years. In cremation ceremony day, all the corpses that buried in this cemetery will be taken from the grave and cremated appropriate to Balinese Hindu Tradition 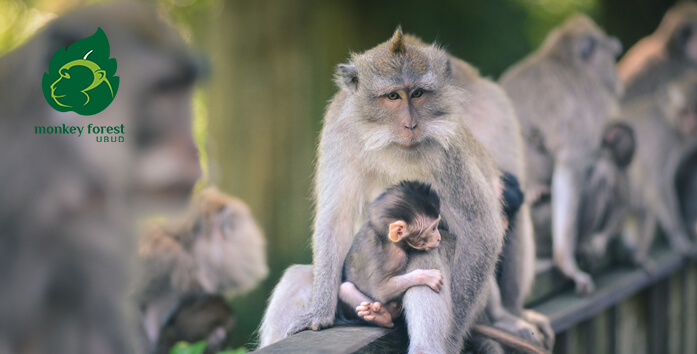 The population of the Balinese long tailed monkey – in English called Macaque (Macaca fascicularis) in Monkey Forest Ubud is about 1059* monkeys. They are divided into 7 groups: Central group, Temple group, Selatan group, Cemetery group, Michelin group, East group and New Forest group. Each group may contain about 100 – 120 monkeys consist of: infant, juvenile 1, juvenile 2, subadult male, subadult female, adult male, and adult female. Macaca fascicularis is active during daylight and rest during the night. The sexual maturities of males are in age 4 – 5 years and females about 3-5 years. The beginning of female menstruation is in age of 2 – 3 years. The menstruation period is about 28 – 31 days in 2 – 7 days.

Female monkeys are pregnant nearly 6 months, usually only one infant, rarely are twins. Infant stayed with their mother about 10 months, received breast milk for the first 6 months and after 6 months, they started to eat another food. The average weight for females are 2.5 kg to 5.7 kg and the males are 3.5 kg to 8 kg. Sometime, their weight can reach over 11 kg. The lifespan of males up to 15 years and females up to 20 years. The long tailed macaques are omnivores. In the Monkey Forest Ubud, the main food of the monkeys is sweet potato, given 3 times a day and combine in daily with: banana, papaya leaf, corn, cucumber, coconut, and other local fruit.